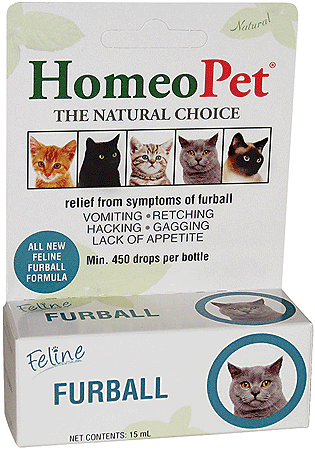 Promotes a healthy digestive and grooming process. Can aid with signs of furball such as hacking, retching, gagging, vomiting and loss of appetite.

DIRECTIONS FOR USE:
Dose medicine directly into mouth, in water or on food
Administer one dose 3 times per day, as needed

For cases that are not acute, one dose 3 times daily.

Once a response is seen, the administration should be reduced to 2 times daily and eventually once daily. When symptoms clear up, discontinue use. If reduction causes symptoms to worsen, original dosing may be continued a little longer before reducing.

If a remedy is working well and dosing is not reduced, an aggravation of symptoms from overuse may occur. Stopping the remedy for 3 days will reverse the symptoms, and then treatment can begin as if using for the first time, weaning down as mentioned above.

Ingredients:
All HomeoPet products are made from 100% natural ingredients and are safe for puppies, kittens, pregnant and nursing animals. Safe, Gentle, All Natural liquid dosing medicines for your best friend..

Alfalfa 3x(Lucerne Grass)
Alfalfa, Medicago sativa also called lucerne, is a perennial flowering plant in the pea family Fabaceae cultivated as an important forage crop in many countries around the world.

Althea officinalis 3x(Marshmallow)
Althaea officinalis is a perennial species indigenous to Europe, Western Asia, and North Africa, which is used as a medicinal plant and ornamental plant.

Linum usitatissimum 3x(Flax Oil)
Flax, also known as common flax or linseed, is a member of the genus Linum in the family Linaceae. It is a food and fiber crop cultivated in cooler regions of the world.

Olea europea, flos 3x(Olive Oil)
The olive, known by the botanical name Olea europaea, meaning “European olive”, is a species of small tree in the family Oleaceae, found in the Mediterranean Basin from Portugal to the Levant, the Arabian Peninsula, and southern Asia as far east as China, as well as the Canary Islands and Reunion.

Ornithogalum umbellatum 3x(Star of Bethlehem)
Ornithogalum umbellatum, the garden star-of-Bethlehem, grass lily, nap-at-noon, or eleven-o’clock lady, is a perennial bulbous flowering plant, native throughout most of southern and central Europe, north-western Africa and south-western Asia. To be considered in chronic gastric and other abdominal indurations, possibly cancer of intestinal tract, especially of stomach and Caecum. Center of action is the pylorus, causing painful contraction with duodenal distention.

Ulmus campestris 3x(Slippery Elm Bark)
Ulmus campestris is a potent kidndey and skin drainer. In particuar, it is traditionally used in eczema, diaper rash, chicken pox and tinea. It also drains to help correct metabolic imbalance and is remineralizing. When skin problems are of kidney origin, this is the key remedy to think of.

Triticum Repens 3x(Couch-Grass)
Elymus repens, commonly known as couch grass, is a very common perennial species of grass native to most of Europe, Asia, the Arctic biome, and northwest Africa. Used as medicine against fever, internally as a tea, syrup, or cold maceration in water, or externally applied as a crude drug.

INDICATIONS: This remedy can produce relief from the symptoms of Furball (also known as Hairball). It can also help with similar foreign body and digestion symptoms.

ADMINISTRATION: Optimally, the liquid preparation should be dropped directly into the mucous membrane of the mouth including lips; ideally in dogs by pulling out the labial pouch, and in cats by raising the head until the mouth opens. Where an animal finds this distressful, or an owner is unable to comply, the medication can be put in the food, water or milk. Where animals are sensitive to the odor of the alcohol preservative, a 10-20 minute period should be allowed for dilution and evaporation before the liquid or food is presented to the patient. Occasionally, animals will shake their heads as a response to the alcohol preservative; cats may salivate excessively and in these cases, presenting it in food, water or milk works. It can also be added to a sprayer and misted in the air around severely affected patients to calm them down, or dropped around bedding area 3-5 times daily.

ADVERSE EFFECTS AND CONTRAINDICATIONS: None known, other than reversible effect of overdosage. Overdosage will result in a return of symptoms after the symptoms have initially disappeared. Where either increased anxiety or a return of symptoms occurs while on the medication, ceasing to use it will alleviate the effect. Patients who are hypersensitive to homeopathic preparations will show response to a single dose, which may not need to be repeated for some time. For this reason therapy should always start with a single dose and should a major response be seen, therapy should not be recommenced until symptoms relapse, and then only a single dose given for maximum effect. Although there is no evidence that there are any safety issues, extra care should always be taken when dealing with pregnant animals. Should a suspected adverse reaction be seen or advice needed, please contact HomeoPet LLC. Contact your veterinarian if problems persist.

DRUG INTERACTIONS: None known for animal use only. Keep out of reach of children.

PHARMACEUTICAL PRECAUTIONS :Store at room temperature, out of direct sunlight, and away from strong odors.

ENVIRONMENTAL IMPACT: To date none found.